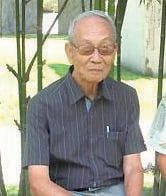 Chu Chee Chuan was also known at Ziyang, Shuwen and Xianshi. A native of Guangzhou City, Guangdong Province, he moved to Ipoh, Malaya to seek asylum and meet his father in 1938. After completing his Cambridge diploma programme in 1949, he served as the head of news correspondents in Nanyang Siang Pau Perak branch. In 1962, he went to the Kuala Lumpur branch and worked as an editor. In 1964, he worked as a supervisor for the Chinese News department in Radio Televisyen Malaysia (RTM). He then returned to Nanyang Siang Pau, which was a Malaysian independent newspaper, serving as a columnist for the “Chu Chee Chuan column”. He subsequently served as the editor-in-chief and editor advisor in the same newspaper before his retirement in 1985.