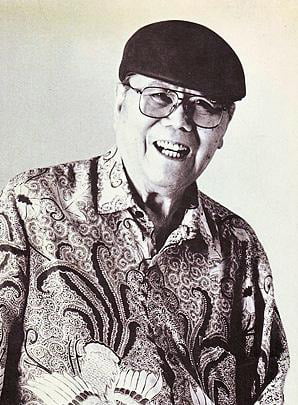 Pan Shou, initially named Pan Guoju, was a native of Nan’an City, Fujian Province. He graduated from Quanzhou Peiyuan Middle School in 1927. In 1930, he came to Singapore and served as an editor of a newspaper, a secondary school principal and some other positions. He was a well-known poet and calligrapher. He was also once the personal secretary of Tan Kah Kee. He was especially proficient in the art of calligraphy. In 1953, he was involved in establishing the Nanyang University and served as the founding secretary-general.

Pan Shou had a very high reputation in Singapore and Southeast Asia. He had dedicated his life in propagating Chinese culture and had a very close relationship with China’s culture circle. He had high attainments in calligraphy and classical poems. In 1995, he was proclaimed as a national treasure by the Singaporean government. His calligraphy and poetry were excellent and he had won the France Art Saloon Gold Award, Singapore Government Art Award, France National Art and Literature Medal, Singapore Excellent Medal, ASEAN Cultural Award and Singapore Calligraphy Society Honorary Award.

Pan Shou studied intensively on calligraphy. In his early days, he learned the style of Yan Zhenqing and Yu Shinan, later changed to learn the Northern Wei Stele script. He also excelled in the regular script and running script. Finally, he combined all of these and created his own style. He was known as the great pillar of Nanyang in calligraphic circle. In 1982, he published 3 volumes of his calligraphic works. He had once inscribed the title of Singapore’s Lianhe Zaobao and Lianhe Wanbao, and had held two calligraphy exhibitions in 1984 and 1991 at the National Museum of Singapore. His calligraphy was loved and respected by many across social circles. Besides in Southeast Asia, his works can also be seen at other places such as, Qufu Confucius Museum, Stele Forest at Xi’an and Wuhan Yellow Crane Tower.

Pan Shou also liked to write essays and poems. In 1928, he won the first prize in China Anti-Drug Thesis Competition, in which Peking University president Cai Yuanpei was the chief judge. In his early days, he liked to write poems in the modern style. He then started to write classical poems in his youth and published several books such as Haiwai Lushi in 1970, Yunan Yuanshiji  in 1984 and the 800-page Selected Poems of Pan Shou in 1997, all total to over 1,300 poems.

Pan Shou drew inspiration from the calligraphy style of Yan Zhenqing and He Shaoji. His brushlines are broad and rich, and looks like the trails of worms and snakes. His technique of writing makes use of the centre of a brush and he took his time when writing. His exquisite flexes and turns of brushstrokes are attributed to the use of centre-tip of the brush. His characters were bold and were liken to a flying swallow, while their composition was balanced but not without astonishment.