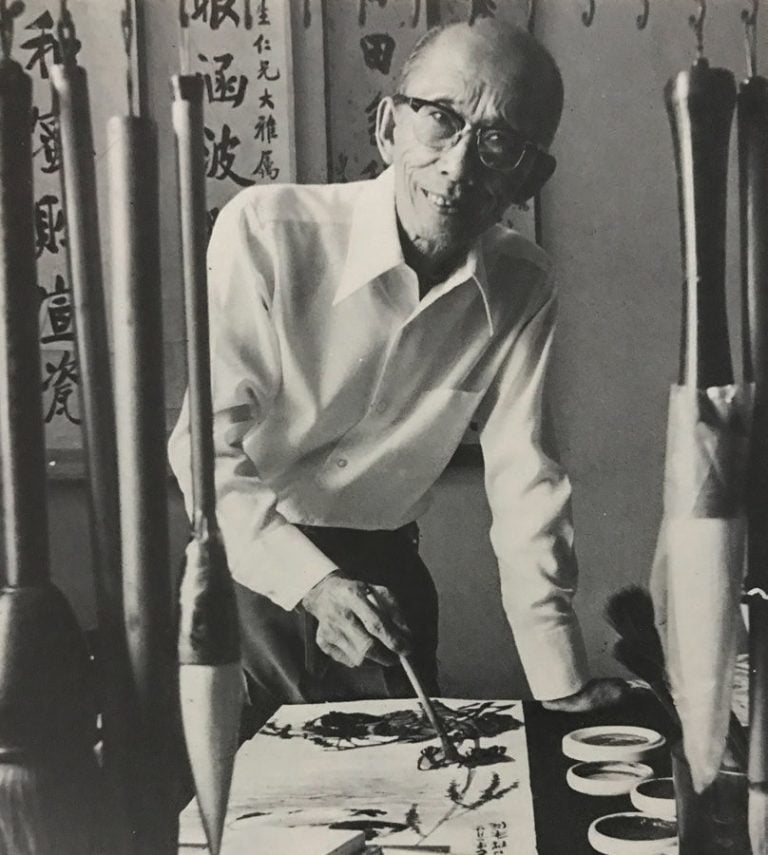 See Hiang To, courtesy name as Hong Ze, or sobriquet as Yin Sheng and Uncle Ding. He utilised “The Guy of Eight Min” for inscriptions in his works. In his middle age, he named his study as “Jia Leng Lou”, and signed as “Xing Feng Tang” during his golden age. He was born into a literary family in Zhangzhou Prefecture, Fujian Province. The See family was a notable family in Zhangzhou. His forefathers were highly esteemed for their adeptness in poetry, seal carving, calligraphy and painting. The family heirs continue with the family tradition, where they received excellent education and edification from the seniors in the family.

In 1924, after See graduated from Longxi Class A Business School, he work as a teacher at Zhangzhou Dong Hua Elementary School. See took a voyage to Singapore in 1938. In 1941, he was employed to teach Chinese painting in Nanyang Academy of Fine Arts, Singapore. He also taught calligraphy and carving during extracurricular time. He taught for 36 years in total, fostered numerous talented students. In 1972, he was employed to lecture at Calligraphy and Painting Research Academy, Nanyang University. In 1976, he was elected as the President of Singapore Arts Society.

See was an all-rounded artist, especially skilful in calligraphy, painting and seal carving. Regarding his artistic style, Wang Beiyue once commented in Yin Lin Jian Wen Lu, Wang Beiyue’s collection of articles about seal carving, saying that “See was excellent in clerical script and his style resembled the style of Ping-shou I with some alteration, which exudes a sense of steady and unadornedness, with unique lines and curves. His carving works seemed naturally done, liken to a decaying wood eaten by insects. His painting style take root after Wu Changshuo and Qi Baishi, as well as Ren Bonian, he often used local inspiration as his art subjects – truly an innovative person.”

See’s seal script drew inspiration from the bronze and stone drum inscriptions from Qin and Han Dynasty. His writings were steady and composed, utilising both rounds and squares, which led to bold and vigorous, simplistic and artistic effects. His clerical script was also inspired by the Han Dynasty’s stele inscriptions such as “Ode to Stone Gate”, “Fenglong Shanbei”, “Qibo Zhubei”, “Dangyinling Zhangqian Bei”, “Xixia Song” and “Qinshan Jingangjing”. Later, he followed the style of Ping-shou I, Jin Nong and Deng Shiru, all from the Qing Dynasty, and combined with Han Dynasty’s stele script style to create his own style. His running script and cursive script followed after the style of “the two Wangs,” namely Wang Xizhi and Wang Xianzhi. Later, he changed to follow Wang Duo’s style of bold brushstrokes, which exudes a sense of strength, magnanimous and impressive. Furthermore, by using stone carving script method for his manuscripts, he was able to create works that show calmness and a steady manner, yet give out greatness and magnificence. See was also known as the founder of Nanyang art style. He often used colourful strokes similar to Zhao Zhiqian’s and utilised Southeast Asian element as his subject, such as the angel fish, bird of paradise and orchid. He had combined traditional and innovative styles, resulted in realistic yet expressive works. He painted flowers and birds more than portrait and nature scenery.

See was one of the most influential all rounded Chinese artists in Singapore and Malaysia. For half a century, he devoted his life in propagating arts education and culture in Singapore, sowing artistic seeds in both Singapore and Malaysia, and fostered many talented artists that excels in painting, calligraphy and carving, this later became the origin of the “School of See Hiang To” which is flourishing around Singapore and Malaysia nowadays. Many members of this school are very active in both countries’ calligraphy circles and have inherited See’s efforts in spreading the art and education in calligraphy as well as calligraphic exchanges; some even became teachers in Nanyang Academy of Fine Arts, Singapore.