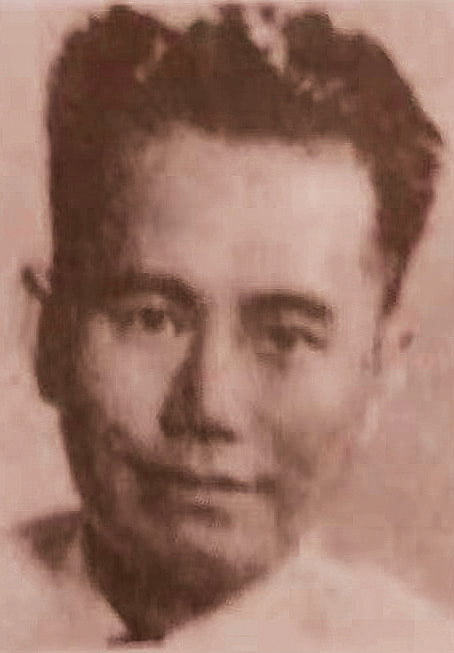 Seow Yeoh Thian was a native of Miancheng Town, Chaoyang District, Guangdong Province. He was initially named Gongwei, with courtesy name Wuwei and sobriquet Jiangyuan. In late 1920s, together with Zheng Zhuoqun, Chen Dayu, Chen Wenhsi, he formed the Spring Sun Painting Society in Wai Ma Road, Shantou City. He had also formed Red Persimmon Literature Society in the high school where he studied. In 1930, he studied at the Shanghai Academy of Fine Arts. During the Sino-Japanese war, he worked at the Chaozhou War Zone Supervision Office of the Ministry of Education, as the chief editor for Chaozhou Culture. After the war ended, he was invited by the renowned sinologist and great scholar of Chinese studies, Mr Jao Tsung-I, to take up editorial role in the Chaozhou Editorial Centre. He was the chief editor for Language Journal and Theatre And Music Journal. He went to Hong Kong in 1950, and later settled in Penang, Malaysia in 1953. He taught in Chung Ling High School and Malaysia Academy. He was also one of the curriculum committee in Malaysian Ministry of Education. He was the chief editor for Teaching and Learning monthly magazine. His works’ contents included textual research, essays, novel, couplet and poetry, covering in about 40 issues with about 6 million words written.

Seow Yeoh Thian admired cursive script very much. He studied the stone inscriptions of Han Dynasty, such as “Ode to Stone Gate”, “Yiying Tablet” and “Hengfang Tablet”. He also studied the manuscripts of Jin, Wei, Sui and Tang Dynasty, especially Suo Jing’s “Yueyi Manuscript” and Huang Xiang’s “Ji Jiu Chapter” where their techniques are crafty and unique, composing of clerical and cursive scripts. His clerical script is graceful, strong yet gentle, steady, peaceful and appealing. His cursive script is small and round yet uniquely beautiful, exuding an ancient spirit. It has the core of clerical script as well as brushstrokes of running script. It exhibited a rhythm that are not bound by any secularity, liken to an endless flow of a stream.

Renowned painter Zhang Daqian once commented that; Seow Yeoh Thian’s brushwork had made a profound impression in me. He is a master who can integrate poetry, painting and calligraphy all into one.

The overseas Chinese of Southeast Asia call Seow Yeoh Thian the pride of Chaozhou in Southeast Asia. Considering all his works from the earliest years, he had written up to 6 million words!

There are several categories of Seow Yeoh Thian’s works;

These works are valuable resources on the Chaozhou culture, language, drama and music which have received high commendation of sinologists from all over the world.