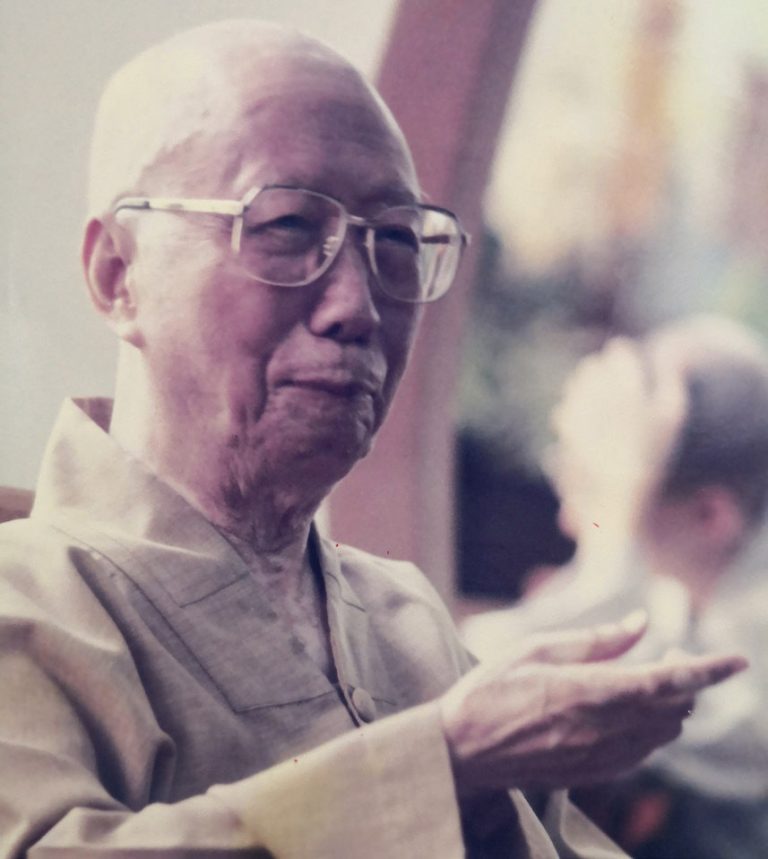 Venerable Zhu Mo was born on the 13th day of the eighth lunar month in 1913 and was a native of Yueqing County, Zhejiang Province. He graduated from Buddhist College of Minnan and was a research scholar at Buddhist College of Wuchang. In 1924, he was tonsured by Venerable Bai Yun of Shouchang Temple in Huangtang Town, and was given the Dharma name Mo Cheng, courtesy named Shou Zhi. In 1928, he received the full ordination from the renowned Venerable Di Xian of Tiantai school, and began studying various Buddhist doctrines. In 1933, he was appointed to serve Venerable Tai Xu, and later he followed Venerable Tai Xu to Hong Kong, Macao and other places where he lectured. Venerable Zhu Mo was one of his outstanding students.

In 1939, Venerable Zhu Mo became the chief editor of the magazine Jue Yin in Hong Kong (Macao). During this period, he established a deep connection and mutual mentorship with Gao Jianfu, the founder of the Lingnan Painting School. It is a much-told story that, Gao Jianfu learned the dharma from the Venereable, and the Venerable learned the art from Gao Jianfu. In 1951, he founded the magazine Endless Lights; and in 1953, he served as the head of curriculum at Buddhist College of Qixia.

In 1954, Venerable Zhu Mo presided over the consecration ceremony of the stupa of Venerable Tai Xu in Thailand. During the period, he held a solo painting and calligraphy exhibition. On April 19, 1959, he was unanimously elected as the first president of the Malaysian Buddhist Federation. In July 1962, he and his disciples initiated for the establishment of Triple Wisdom Hall, which was completed in 1965.

In 1963, together with 13 other masters including Ben Dao, Zhen Guo, Jin Xing and Jin Ming, Venerable Zhu Mo initiated the purchase of a land on Jalan Burma, for the construction of the Malaysian Buddhist Association. In 1969, he also founded the Malaysian Buddhist Institute, and became the first president of the institute in 1970.

On March 23, 1990, he began his retreat for 3 years. In 1996, his handwritten calligraphy of the Heart Sutra was collected by the National Palace Museum in Taipei. In 1998, he was conferred the DMPN datukship by the Head of State of Penang. Venerable Zhu Mo passed away on February 4, 2002, at the age of 90, after 77 years of monkhood.

Venerable Zhu Mo mastered the art of painting, calligraphy and poetry. His works were admired by the world over. His calligraphy emanates mastery of brushstrokes and unrestrained compositions of characters. Every stroke seem vivid and full of zest, and the characters are naturally wonderful. Venerable Zhu Mo and his contemporary, Venerable Bo Yuan, were known as “Bo of the South and Zhu of the North”. They are the two masters who displayed great mastery of poetry, calligraphy and painting, after Master Hong Yi and became the great Master of Zen and Art of this modern era. His works included 24 volumes of The Collected Works of Zhuanxiang Studio and some calligraphy and paintings album.