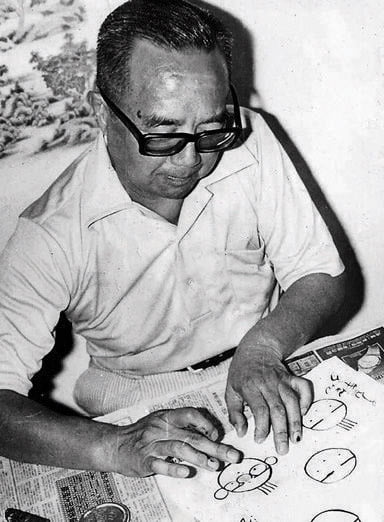 Huang Yao, initially named Huang Jia Tang was born in Shanghai, China and was a native of Jiashan County, Zhejiang Province. He was greatly influenced by his father, Huang Han Zhong who was proficient in classical literature as well as calligraphy and painting, yet did not serve as a government official in his lifetime. Huang Yao studied painting and calligraphy from his father since childhood, and also studied ancient literature and art with his grandfather. His first learned calligraphy through Han stele inscriptions and cursive scripts, later on oracle bone scripts and bronze inscriptions. He also did research in grammatology. On painting, he specialised in a technique called the “Shuanggou” outline technique and learned the style of artists such as Mi Fu and Mi Youren, Liang Kai, Xu Wei, Lao Lian, Bada Shanren, Shi Xi and Shi Tao, such extensive learnings enabled himself to establish a strong foundation in art creation. In 1933, he began to use the name Huang Yao when he worked in Shanghai Newspaper.

Huang Yao’s job required him to draw cartoons, and he later became well-known as “Niubizi” (ox’s nose) in China. During that period, he had published several volumes of Niubizi Comic Album , and other books such as Ten Lectures by Niubizi, If I Were and Niubizi Granting Happiness . Fitting in with his “Niubizi” cartoon, Huang Yao also created his own unique “Chu Yun Script” (the artist turn the paper orientation upside down and writes the character from the bottom to top of the proper orientation). In addition, his Wenzi Hua (Calligraphic Painting) were also very distinctive. In 1956, Huang Yao arrived in Malaysia via Vietnam and Thailand. He then served in Han Chiang Independent High School, Penang and subsequently in SMJK Sin Min, Alor Setar for many years until 1973, when he retired early due to poor health. After that, he devoted himself to painting and calligraphy, and also to the research of the history of Chinese people in Singapore and Malaysia. At the same time, he devoted himself to promote local cultural activities involving painting and calligraphy, and had published a book entitled Ma Xing Huaren Zhi (The History of the Chinese in Malaysia and Singapore).

Huang Yao is a diligent artist throughout his life, and was also a respected researcher on literature and history. In 2000, his successors held a solo exhibition in memorial of him entitled “Niubizi Huangyao Memorial Exhibition” in Kuala Lumpur and published the Moyuan Suibi; The following year, “Huang Yao Retrospective” was held at the Singapore Art Museum. In 2008, “Huang Yao Memorial Exhibition” was held at Wisma Kebudayaan Soka Gakkai Malaysia, and “Huang Yao Retrospective” was held at National Art Gallery of Malaysia in 2013.