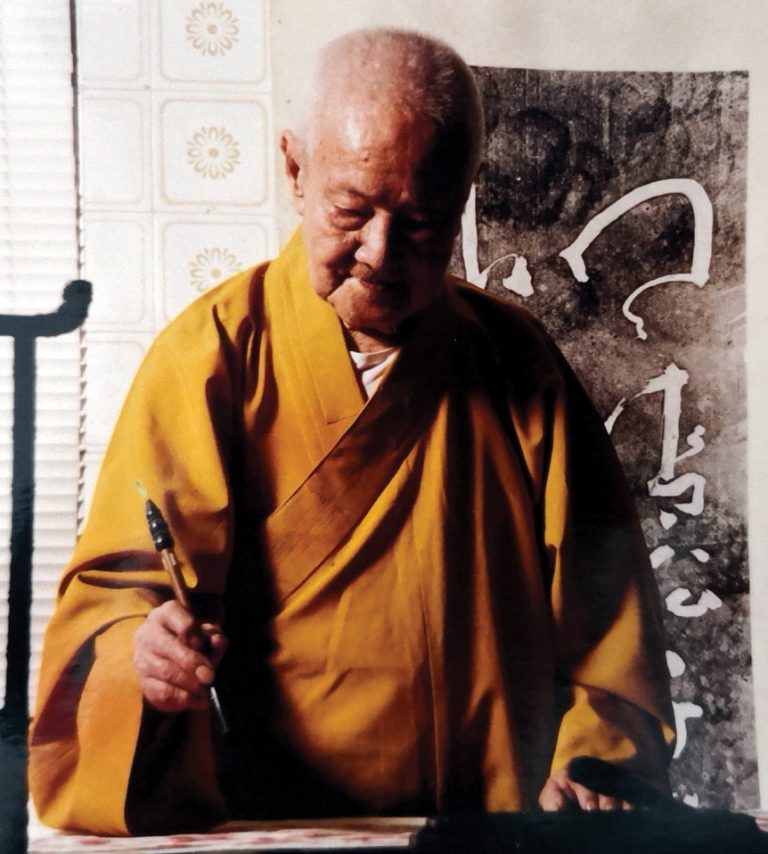 Venerable Bo Yuan initially  named Li Defu and was a native of Fu’an County, Fujian Province. He went to a private school at his childhood, and began forming ties with ink and brush, and read extensively on famous calligraphy at a young age. At the age of 19, he devoted himself into the monkhood at Shifeng Guanghua Temple and regarded Venerable Jin Sheng as his mentor. At the age of 20, he received the full ordination from the eminent Venerable Xu Yun at Yongquan Temple in Mount Gu, Fuzhou Province. He later entered the Buddhist Institute of Shigu and was inducted as a receptionist of Gushan Conglin (the living quarters of the monks). There were many ancient pines and uniquely shaped rocks at Mount Gu area. These rocks are adorned with calligraphies by renowned calligraphers from the Five Dynasties period, including Zhu Xi’s “Tian Feng Hai Tao” and Wen Tianxiang’s “Zhong Xiao Lian Jie.” Such meter-wide huge characters have powerful strokes that struck the soul of the viewer and are liken to the rising of storms and scudding clouds, like dragons raging into the sea. As such, the Venerable’s fateful encounter with calligraphy, ink painting, and Buddhism, enabled him to learn from many masters and sages. Being surrounded by the pines forest, ancient stele inscriptions and literates, he was able to immerse in the spirit of calligraphy and painting for a long time.

Venerable Master Bo Yuan had shouldered great responsibility. In 1947, he was sent by Mount Gu main temple to a branch temple in Nanyang, which is Southeast Asia’s first famous temple, the Kek Lok Si Temple in Penang, and served as the abbot. Apart from propagating the Dharma, the Venerable also diligently advanced in his calligraphy and paintings skills. In 1961, he was invited to preach in Kuala Lumpur to many believers. He then accepted the invitation to move to the capital city and founded a temple named Hubin Jingshe to continue his propagation of the Dharma and benefited more people. The Venerable was very keen on meeting people and often involved in culture, arts, and education activities. At the same time, he was also invited to be the permanent adviser of the Malaysian Buddhist Association and the adviser of many social welfare organisations. He was vastly knowledgeable, thoughtful and discerning. His skills in creating poems, calligraphy, and painting had reached perfection in mastery. He called himself the “Idle Person of Hubin”, as he has simple lifestyle and often write and draw for his own pleasure or as meditation. The collections of his works of art include, “Scar on the Sleeping Lion”, “Talking about the past amongst the whistling pines”, “Wandering Monks on the Mount Wutai”, “Peaceful Mind – The World of Zen Art by Venerable Bo Yuan”, “The Fateful Relationship of Brush and Ink”.

Venerable Bo Yuan’s calligraphy was selected to be inscribed at the Shenmo Stele Monuments and Du Fu Stele Monument in 1991 and 1992 respectively. In 2000, he was invited by the National Art Gallery of Malaysia to hold his solo exhibition. It was the first large scale solo Chinese calligraphy and ink painting exhibition held in the National Art Gallery.

Venerable Bo Yuan’s calligraphy is uniquely distinctive by it’s own. His works shows powerful strength, liken to the stone-inscribed Diamond Sutra of TaiShan. His calligraphic style was based on stele script, it was magnanimous yet unrestrained. The structure of his characters and overall composition enhanced the beauty of stele scripts, while also demonstrates the refined and liberated style of an eminent monk. The Venerable’s calligraphic style is easily recognisable. One would feel joy looking at the calligraphy as if the characters are relics, pearls, like fresh breeze blowing to our faces or the light of Buddha shining into our souls. The Venerable’s calligraphy was collected by many public institutions, including China Shenmo Stele Monument, China Du Fu Stele Monument, National Art Gallery of Malaysia, Jade Buddha Temple in Shanghai, Po Lin Monastery on Lantau Island, Chi Lin Nunnery in Hong Kong, Hualien Buddhist Compassion Relief Tzu Chi Foundation in Taiwan, HCS Calligraphy Arts Foundation  in Taiwan, Guangming Buddhist Temple in New York, Kek Lok Si Temple in Malaysia, Kek Lok Tong, Kuan Yin Temple, Sam Poh Wan Futt Chi Temple in Cameron Highlands, Jing Loong Shan Wan Fo Shih, Thean Hou Temple in Kuala Lumpur, Kong Meng San in Singapore and many other Asian and American private institutions and collectors.