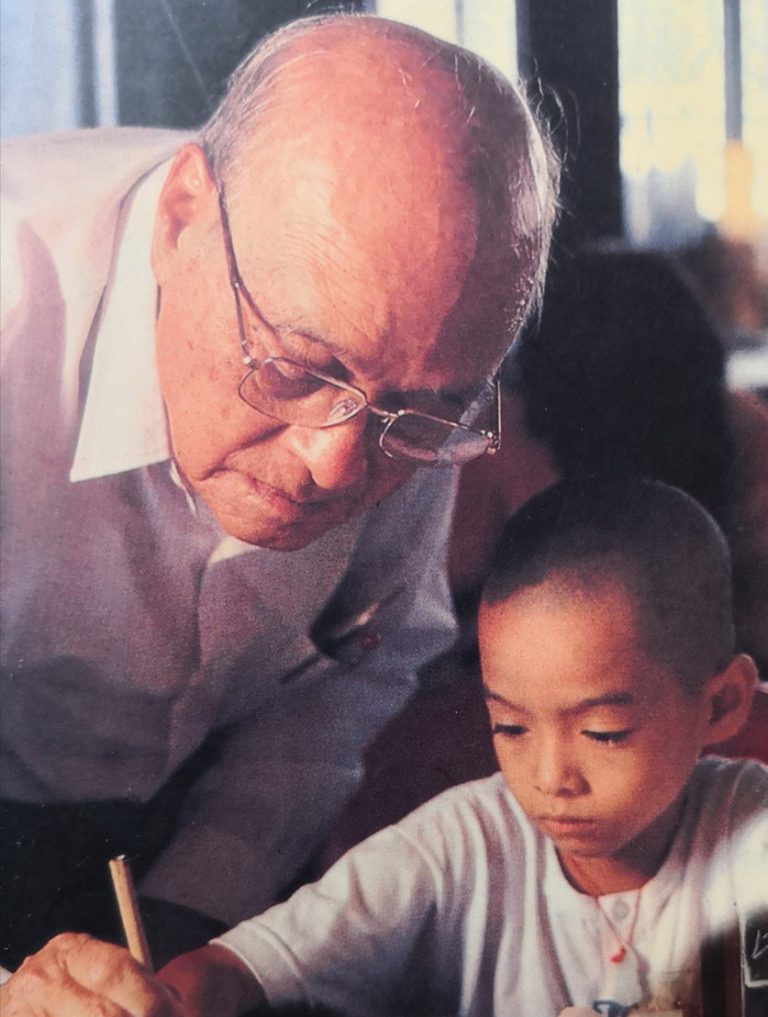 Datuk Sim Mow Yu was born in Melaka and was a native of Jinjiang County, Fujian Province. He is Malaysia’s well-known Chinese educator and had been imprisoned three times for his struggle for the nation and Chinese ethnic. His father was Sim Hong Peck who served as the leader of Tongmenghui (Anti-Manchu group) in Melaka and was also one of the founders of Pay Fong Middle School in Melaka. Sim Hong Peck named his son “Mow Yu”, which means admiring Guan Yu, a famous general of the Three Kingdoms period. During the War of Resistance against Japanese Aggression in 1937, Sim served as a vanguard troop, leading the resistance in Malaya. After the fall of Malaya, he was imprisoned and tortured. After the war, he was active in the politics. He has founded the Malaysian Chinese Association Youth and served as its deputy president. However, he was expelled from the party, when he strive to make Chinese language as the official language. In 1971, he was suspected of violating sedition laws for advocating the unity of Chinese people, but the lawsuit was redressed two years later.

In 1987, Datuk Sim Mow Yu lost his freedom for two years for objecting against allowing teachers who were not proficient in Chinese to hold higher vocational positions in Chinese schools. He devoted himself to the struggle for using mother tongue in education for decades had never slackened. He had served in dozens of positions including the chairman of the United Chinese School Teachers’ Association Of Malaysia (UCSTAM), Malacca Chinese School Teachers’ Association, and Lim Lian Geok Foundation; the principals of SJK(C) Peng Bin and Seng Cheong Night School as well as the vice-chairman of the Merdeka University. In 1956, he had served as the representative of Chinese Advisory Board in Melaka and was bestowed the “Justice of the Peace” by the Queen of United Kingdom. In 1959, he was the first person in the education sector to be conferred the JMN (Johan Mangku Negara) by His Majesty Yang di-Pertuan Agong.

In 1997, Datuk Sim Mow Yu became the first overseas Chinese to receive the Nation Cultural Award of R.O.C. (Taiwan). In 1999, he was bestowed “Darjah Mulia Seri Melaka (DMSM)” by the heads of state of Melaka and he also received the Lim Lian Geok Spirit Award. In 2007, Cheng Ho Museum in Melaka set up the “Sim Mow Yu’s Calligraphy Museum”, and had its opening in 2011. His style of writing takes the calligraphy style of Yan Zhenqing of the Tang dynasty as his backbone as well as the calligraphy styles of Zhao Mengfu of the Yuan Dynasty and Liu Gongquan of the Tang Dynasty for its expressions. His style is vigorous and magnificent, thick and rich, while his writing is calm yet powerful. This unique style is called “Sim” script; it has a wide influence on the calligraphy circles in southern Malaysia.