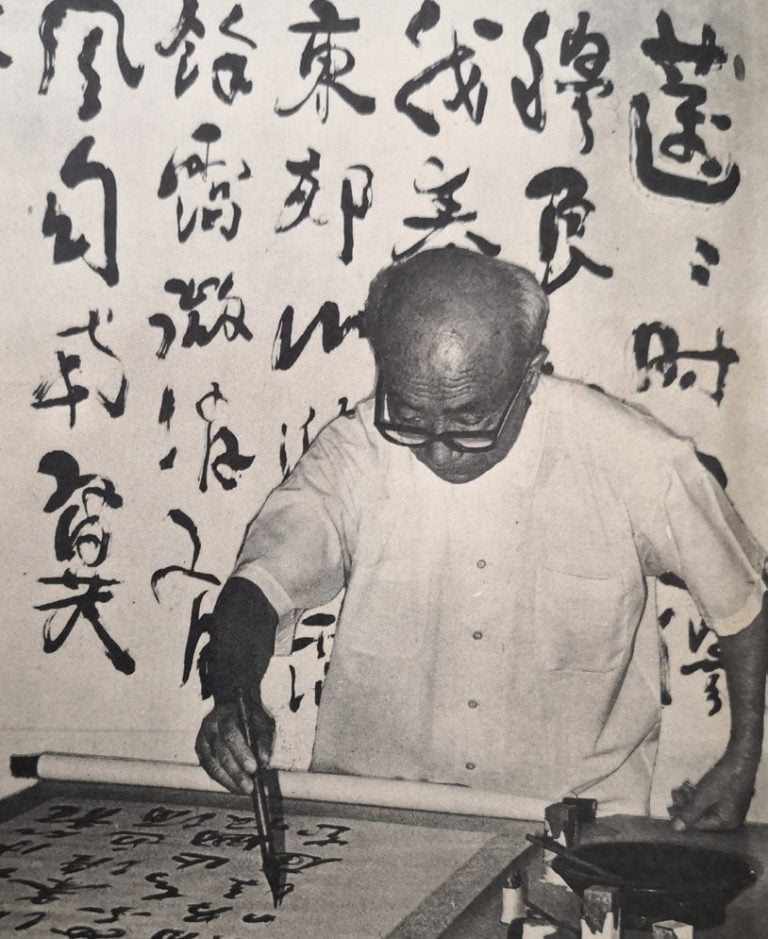 Tsue Ta Tee was a native of Beijing Province. He was known as the first generation of Malayan and Singaporean Calligrapher. He was once a volunteer teacher at the Calligraphy Club of the Hua Yi Secondary School in Singapore and had fostered many capable youths. Early in his life, he organised many Chinese calligraphy exhibitions in various places in Europe and Southeast Asia, including his solo in the Chinese Chamber of Commerce in Singapore in 1946, his solos in Kuala Lumpur (1948), Penang (1949), and Ipoh  (1950). In 1952, he had sojourned in the United Kingdom and had his solo in the UK Chinese Arts Association. Then, he consecutively organised his solo calligraphic exhibitions at the University of London, the University of Oxford, and the London Education Centre.

In 1954, Tsue Ta Tee organised his solo exhibition at the Dorothy’s Gallery. And in 1955, he accepted BBC’s invitation to give a speech and record a video demonstration. During his  sojourn in the United Kingdom, he focused on the creations of calligraphic art. He spent a huge amount of time in British Museum to study the ancient characters and oracle bone inscriptions. He researched deeply into the formations and evolution of Chinese ancient characters. From these oracle bone inscriptions, he utilised his aesthetic quality and finished creating 114 pieces of calligraphy in oracle bone script, completed all in 1953. He then returned to Penang and was engaged in the creations of calligraphy. Many of his calligraphy works remained at Singapore and Malaysia, including the Civilian War Memorial monument, the inscriptions on Singapore Federation of Chinese Clan Associations, and academic institutions.

Tsue Ta Tee’s calligraphy is known for being strong and vigorous, with vital essence and charm. He was skilful in calligraphic styles including zhen (regular), cao (cursive), li (clerical), zhuan (official seal), and studied wholeheartedly on the stone-drum, bronze and oracle bone inscriptions; thus, the form of his calligraphy is highly variable and filled with traditional elements. Works produced in the latter years of his life entered an even higher realm. Using contrasting high and low positions, layers and compositions, as well as the usage of different calligraphic scripts to create beautiful compositions. He pushed calligraphy art to a new level, containing four calligraphic elements of implicit charm, principles, thoughts and intentions, as well as expressions.