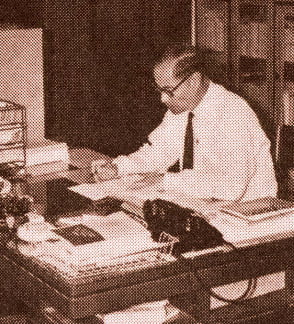 Wang Fo Wen was a native of Tai County, Jiangsu Province. He was known by his courtesy name Yi Chu and sobriquet Ti Zhai. He was a graduate of Nanjing University and Southeast University (formerly known as National Central University), majoring in English Language. Wang was the Chinese Education supervisor of the Ministry of Education of Malaysia, principal of Indonesia Surabaya Overseas Chinese High School, and principal of Foon Yew High School in Johor Bahru. Wang was a renowned educator and scholar across Malaysia. His son, Prof Wang Gengwu, has even greater achievement and is a renowned educator, historian and overseas Chinese academician.

One of his notable publications is Ti Zhai Prose Compilation by Wang Fo Wen. Wang started learning calligraphy from clerical script of Han Dynasty and later Ouyang Xun’s stele script of Tang Dynasty. Wang’s calligraphy was based on the style of Tang Dynasty’s Yan Zhenqing and he drew inspiration from He Shaoji of Qing Dynasty on the composition of his running script. Firm and distinctive, his calligraphy exudes a strong sense of vigour and elegance.